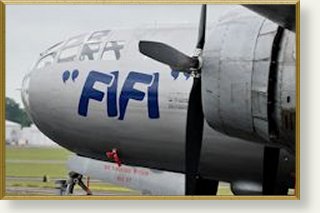 “Fifi” is a Boeing B-29A Superfortress, serial number 44-62070.  She was constructed in 1945 and is presently owned by the Commemorative Air Force in Addison, TX.  After an extensive engine refit between 2008 and 2010 Fifi is once again prowling the United States as the only example of a flying B-29 left anywhere in the world today.

This was a very unique experience for an airplane lover like me, and one that I had to take advantage of.  Her consorts for this flight were a P-51 Mustang named “Gunfighter”, a C-45 Expediter named “Bucket of Bolts”, and an unnamed but immaculate Stearman PT-17 .  My thanks to the CAF for providing this unique experience.  It is very much appreciated!

Edit – May 26. 2017 – Fifi made another appearance at Smyrna this weekend and I went by today to see her again.  I have to revise one statement that I made after seeing the airplane in 2013.  I stated in the first paragraph above that Fifi is the only surviving B-29 in flying condition anywhere in the world.  According to a placard they had on display Fifi is one of TWO surviving B-29’s in flying condition.  The placard did not say where the other one is, but I was wrong in saying that Fifi was the one and only.