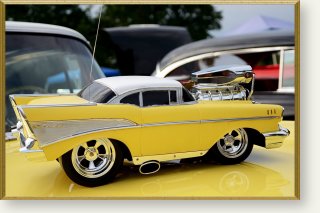 Despite the forecast calling for mostly cloudy skies throughout the day it didn’t look good at first.  I checked the radar when I got up and there was a big thunderstorm right over Bowling Green, and to make it worse I drove through light rain most of the way to Bowling Green.  But the weather wizards were right because that was the end of it.  I stopped in Franklin, KY and ate breakfast and by the time I got to the track the rain was gone leaving behind soggy conditions, humid air, and a lot of people drying off their show cars.

And show cars there were aplenty!  I heard the announcer claim that there were 2,800 cars registered but I think that was a bit of an overstatement.  My guess would have been closer to about half that many, but still plenty enough to keep anyone busy looking and admiring for a while.